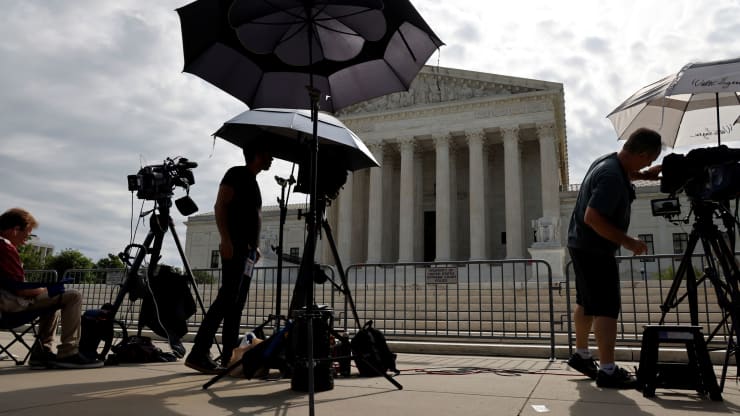 The Supreme Court begins its new term on the first Monday in October, a tradition that dates back to 1917.1 This year, that meant yesterday, Monday, October 4. In the term ahead, the Court is set to take up many key constitutional and legal issues. To explore those issues, Close Up is offering a free webinar for students and teachers with University of Illinois Chicago law professor Steven Schwinn on October 13.

LEARN MORE AND REGISTER: Close Up Conversation with Steven Schwinn

Three of the biggest issues that the Supreme Court will take up this year are abortion and reproductive rights, gun control and Second Amendment rights, and separation of church and state.

Dobbs v. Jackson Women’s Health Organization stems from a challenge to a 2018 Mississippi law that bans all abortions after 15 weeks of pregnancy. If the Mississippi law is upheld, it will allow other states to pass similar laws. While this would not completely overturn the landmark Roe v. Wade (1973) decision, it would reduce the window in which women could seek to terminate a pregnancy from 24 weeks to 15 weeks.2 Oral arguments for this case take place on December 1.

New York State Rifle & Pistol Association Inc. v. Bruen stems from a challenge to restrictions on who can obtain a permit to carry concealed weapons. The handgun permit in question requires that applicants show “proper cause” for needing a concealed handgun and that applicants be “of good moral character.” Gun rights activists and other critics argue that the restrictions are too vague and a violation of constitutional rights.3 This case will be heard on November 3.

In Carson v. Makin, the Supreme Court is again evaluating the relationship between church and state. Maine passed a law barring the use of public funds, such as student financial aid, to pay tuition at religious schools. If the Maine law is overturned, families would be able to use government financial aid money at “sectarian” religious schools.4 This case is set to be heard on December 8.

In addition to these issues, the Supreme Court is taking up cases about:

All of these cases come at a time when Gallup polling shows that approval of the job the Supreme Court is doing is at its lowest since 2000.9 Given these cases and the nature of political polarization, this could be one of the most impactful—and controversial—Court terms of the past several decades.

« Texas S.B. 8 and the Future of Reproductive Rights
Back to all Posts
Should Facebook Be Regulated? »