How Would You Vote in the Senate Impeachment Trial? 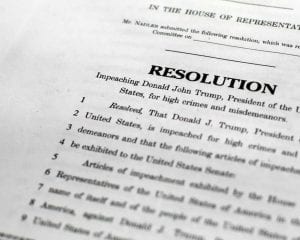 Editor’s Note: This week, we created a longer post to provide some background on both the process and substance of President Donald Trump’s impeachment and Senate trial. This post includes more substantial teaching strategies, including a role-playing approach, that can be used to explore the issues at the heart of the impeachment and Senate trial.

After six weeks of committee investigations and hearings, the House of Representatives voted to approve articles of impeachment on December 18, 2019. These articles accused President Trump of two violations of his oath of office: (1) abusing the power of his office to force a foreign leader (President Volodymyr Zelensky of Ukraine) to investigate a political rival (former Vice President Joe Biden) and his son; and (2) obstructing the lawful work of Congress by ignoring subpoenas requesting certain documents from the White House and other executive branch agencies, as well as by refusing to allow current and former executive branch officials to testify before investigating committees.

On January 15, 2020, the House appointed “managers” for the case against President Trump, and then officially delivered the articles of impeachment to the Senate.1

For a more detailed account of the impeachment process, please see Close Up in Class’ Controversial Issues in the News on Impeachment.

What Happens Next in the Senate?

The House managers delivered the articles of impeachment to the Senate on January 15; the next day, Chief Justice of the Supreme Court John Roberts swore in all of the senators to serve as jurors in the impeachment trial.2 The oath for the jurors is taken from the first presidential impeachment trial, that of President Andrew Johnson in 1868. The oath is as follows:

“I solemnly swear (or affirm, as the case may be,) that in all things appertaining to the trial of the impeachment of [Donald J. Trump], now pending, I will do impartial justice according to the Constitution and laws: so help me God.”3

After a few days of preparation, Senate Majority Leader Mitch McConnell (R-Ky.) will introduce the rules to govern the trial, to be voted on by the Senate. If the rules are similar to those of the impeachment trial of President Bill Clinton in 1998, as they are expected to be, senators may meet every day except Sunday. Both the House managers and the president’s defense team will have time to prepare their briefs; then, they will receive equal time to make their case before the Senate. Senators will have the opportunity to question both the House managers and the president’s defenders. In President Clinton’s trial, each side had up to 24 hours of floor time to present its case and neither side used its full allotted time.4

Chief Justice Roberts will preside over the trial and rule on any parliamentary inquiries. While the chief justice will have wide latitude in how to rule, precedent has him interfering very little in the process.

Once both sides present their respective cases, the senators have the right to make motions, such as to dismiss the articles or to call witnesses. The rules that the Senate passes at the beginning of the process could affect these motions. If witnesses are called, there must be time for them to testify and be questioned. After all of the witnesses (if there are any) have testified, each side has a chance to make closing arguments.

The final part of the trial is deliberation and voting. Unlike a normal Senate debate, deliberations are often held behind closed doors. In the deliberation phase of President Clinton’s impeachment trial, each senator had up to 15 minutes to speak and his or her remarks appeared in the record only if they asked for them to be published. Afterwards, there is a final, public vote. Remember, there must be a two-thirds majority (67 votes of “guilty”) in order to convict the president.5

The process could go off the rails, especially if the White House tries to prevent witnesses from testifying. There is likely to be at least one motion to dismiss the articles of impeachment without a trial or without deliberation. It is unlikely that the process ahead will be a smooth one.

What Can You Do in Class?

There are a number of ways to address the impeachment trial with your students. First, have all students read the actual articles of impeachment. Then, consider a few options:

Turn your classroom into the Senate and assign different roles to students. This is a process that will take at least three days of class time, if not more. You will have students do research into the specifics of the articles of impeachment and whether or not they rise to the standard of “High Crimes and Misdemeanors” from Article II, Section 4, of the Constitution.

Suggested Timeline: One day (plus homework) for research, one day for presentations from both sides and questioning, and one day of closing arguments, deliberation, and voting. Clearly, a class could take several days to complete this activity if you wanted more time for preparation and to allow each side a full class period to present their case.

Divide the class into four groups.

Make sure that students understand that they are merely conducting research on these positions; they are not sharing their own personal positions.

Each group should research the evidence and arguments for their option. Together, the group will prepare a brief of the main points that support their position. After all groups complete their briefs, the class should then jigsaw into briefing groups (so at least one member of each research group is present). Each student in the jigsaw group then explains the evidence and arguments for or against their assigned article of impeachment as other students take notes and ask clarifying questions.

After students come to understand all sides, they should have individual time to process what they have learned and to determine how they would vote on each article. They should then gather in groups of 2-4 to discuss their conclusions. Then, bring the whole class together so one person from each group can report on what their group discussed. General discussion ensues.

Here is a graphic organizer to assist students. They can take notes on the main arguments for each position.

After the jigsaw, students should work on their own to consider all of the evidence and arguments and determine how they would vote on each article if they were in the Senate. They should be able to explain their reasoning for each of their votes.

Resources for These Activities

You should probably assign students specific pieces that are relevant to their assignments. Reading through the entire majority and minority reports would take too much time. Students should also find their own resources, such as appropriate op-eds and legal analyses. You may wish to appoint a facilitator for each group who could assign specific pieces of the group’s work.