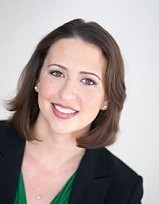 A longtime civic leader in Washington, DC, Councilmember Brianne Nadeau remembers one of her first experiences in the District was a 1997 Close Up trip. As one of a dozen students from Grosse Pointe, MI, she visited the memorials and museums that Close Up students have explored for more than four decades. The civics teacher at Grosse Pointe South High School, Dave Rayburn, ran her school’s Close Up program in the 1990’s and helped Nadeau recognize the paths available to focus her passion for politics. Close Up was one of those paths, and participating in the High School Program helped solidify the idea that she would pursue a life and career in DC.

When Close Up first interviewed her in 2013, Nadeau was challenging a four-term incumbent, Jim Graham, as a candidate for the Ward 1 DC Council seat. Having already served on an Advisory Neighborhood Commission (ANC) in Ward 1, she was well-positioned to run when it became apparent that Graham was vulnerable to a challenge in the 2014 election. Nadeau turned out to be the right candidate to surmount that challenge and won by a 16.9% margin.

The demands of the campaign trail were nothing new to Nadeau, who began working on campaigns at age 11 as a volunteer in a local school board race. She was working in 2006 to elect John Sarbanes to the House of Representatives in Maryland’s 3rd Congressional District while also running her own successful ANC campaign to represent voters in her neighborhood. During two terms on the non-partisan ANC, she also worked on Capitol Hill for Rep. Sarbanes (D), whom she cites as a political and professional mentor. 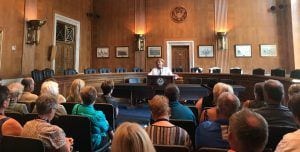 As a representative on the Council of the District of Columbia, Nadeau has a deep respect for DC voters and the democratic process. One of the most controversial issues in local politics is the recently passed Initiative 77, intended to standardize the minimum wage for all workers in the District irrespective of whether they earn tips. She opposed the original measure, which nevertheless passed with 55.7% support across the city and 57.3% in Ward 1. Most of her colleagues also opposed the initiative and have subsequently endorsed a repeal measure. Her decision whether or not to support a repeal will be informed by input from DC residents in a public hearing held on September 17th.

Councilmember Nadeau generously made time to speak with us from her office in Washington, DC.

BN: Citizenship involves a balance of rights and responsibilities. We have a duty to use our constitutional rights responsibly, defend them against encroachment, and advocate for the members of our communities who lack them. DC residents have a special reason to empathize with our non-citizen neighbors. Our rights of citizenship are already compromised by a lack of statehood and full legislative representation at the federal level. I can pass a bill responding to the needs of my constituents but that law can then be overturned by members of the US Congress who were never elected by DC voters. 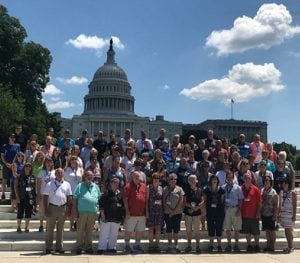 U: What other opportunities helped prepare you for leadership roles in activism and public office?

BN: One of the things I learned from 13 years as a Girl Scout is that you should leave things better than you found them. The values of scouting helped to shape my character as a young person. I also traveled abroad with student missions as a student leader in Hillel (a global Jewish campus organization) throughout high school and college, which helped me to see possibilities beyond my small corner of the world. I joined Hillel’s staff after graduation, passing on my experience by training other student leaders. These roles equipped me with the motivation and confidence to take on future leadership roles.

CU: Speaking of your corner of the world, can you tell us about your hometown?

NB: Grosse Pointe has taken on a place in popular culture over the past few years, almost developing a genre of its own. Jeffrey Eugenides is an author from the area who has written several books that involve characters and settings from Grosse Pointe, including The Virgin Suicides and Middlesex. There have also been some very interesting studies of class and race focused on Grosse Pointe, including one that I came across in my graduate studies.

BN: I love Grosse Pointe Blank (starring Minnie Driver and John Cusack) which came out the same year I attended Close Up. I always joked that Minnie Driver was cast to play me in the movie. We had our 20-year high school reunion this summer, which was not held in the school building itself. My classmates humorously speculated that the decision was made precisely to avoid a Grosse Pointe Blank situation.

CU: How did you make the decision to run for DC Council?

BN: I finished my second 2-year term on the ANC in 2010 and knew that our member on the DC Council in Ward 1 wasn’t the best representative for our community. I had supported his opponent in the previous race, but it had not occurred to me to challenge him myself. Two friends, one a policy expert and another a campaign veteran, told me that he could be beaten. Establishing wider name recognition and demonstrating fundraising ability were two early priorities. We all knew that the work to win that race would have to begin immediately.

CU: Can you describe the progress you’ve seen during your first term in office and what else you would like to accomplish?

BN: Passing the NEAR Act (2016) was an important step forward on public safety through improvements to crime-prevention efforts and police training. I’m also proud to have introduced and passed the Street Harassment Prevention Act (2018). We’ve also made progress in education, including investment of hundreds of thousands of dollars in public education for school modernization and programs to engage students outside of school. A key element in shaping a better future for the city is ensuring that students graduate with the skills they will need for the rest of their lives. On the housing front, my ward has gained more than 500 new affordable housing units in the last four years, and I’d like to see progress continue in making dignified public housing available. I would also like to see the city develop more public spaces that are welcoming to all.

CU: Can you describe the factors in your decision-making process on a controversial issue like Initiative 77 and the proposed repeal measure?

BN: The nuance involved in setting an appropriate minimum wage made my decision to oppose the original measure a difficult one. The council had previously considered and approved gradual minimum wage increases for both tipped and un-tipped workers. Initiative 77 eliminates the distinction. I stand by the decision to oppose the measure initially, but I’m concerned that a repeal by the Council now may undermine the democratic process for DC voters. The livelihood of tipped workers is at stake, so we have to get this decision right for the people we represent. I will take into account the input from the public before making a final decision.

CU: Do you have any advice for those considering a career in politics?

BN: Learning how to listen carefully to others is an important first step in being a public servant. You can only identify solutions to problems if you first understand what those problems are. Get to know your community and find out how people are already working to improve it. Before ever running for office, I was involved locally with our neighborhood watch, local cleanup efforts, and civic association.

Once you understand the needs of your community, make sure that you’re willing to put in the effort necessary to make change. When you ask people to entrust you with power to make their lives better, it is incumbent upon you to be worthy of that trust. I’m grateful for the example Rep. John Sarbanes provided for me as somebody who works hard every day for the constituents in his district. Though it is not easy, public service is very rewarding if you believe in what you’re doing.