156 Years and Counting: Reparations for Slavery in 2021 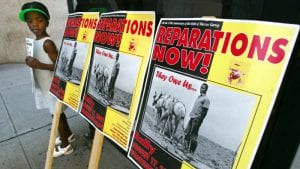 In the wake of this past summer’s demonstrations and civil unrest spurred by accusations of wrongful police killings and systemic racism, Congress is considering legislation regarding reparations to Black Americans who are descended from enslaved people. The bill, H.R. 40: Commission to Study and Develop Reparation Proposals for African Americans Act, was introduced by Representative Sheila Jackson Lee, D-Texas. It does not detail a specific set of reparations; rather, it seeks to establish a commission of elected officials and scholars who would explore the options available and determine the extent to which, if at all, the federal government owes compensation for the economic impacts of slavery on Black Americans.1

The concept of reparations is not a new idea. It has been debated for centuries, even before the Civil War ended and the nation officially abolished slavery.2 This particular bill is also not new, having been introduced by Lee in 2019 under the same title.3 What sets the current conversation apart is that for the first time ever, the White House has expressed direct support for establishing a commission on reparations, with press secretary Jen Psaki stating that President Joe Biden supports such a study.4

Complicated, But Not Unprecedented

The U.S. government has never given any direct compensation, financial or otherwise, for slavery. In fact, the United States only officially apologized for slavery in 2009.5 While the government has made few moves towards reparations for slavery, it has compensated other groups for the historical injustices they faced. There are many examples of this, but we will take a look at two cases—one (reparations for Japanese Americans) that is generally thought to be well-executed, and another (reparations for Native Americans) largely regarded as unsuccessful.6

After decades of petitions, elections, demonstrations, and lobbying, Congress passed the Civil Liberties Act of 1988 to make restitution with the victims of Japanese internment during World War II.7 Recipients included the 120,000 internees themselves, as well as their heirs in the event that an internee had died since the war. Compensation included a formal apology on behalf of the government, funding for public education about the crimes of Japanese internment, and monetary restitution in the amount of $20,000 per victim (approximately $40,000 today).8

Alternatively, spurred in large part by recognition of the key role that Native Americans played during World War II, the government attempted to compensate Native Americans for the lands and livelihoods taken by the United States throughout history.9 In 1946, the Indian Claims Commission formed to hear the historical grievances of Native Americans and to determine restitution.10 As a result of the commission’s findings, the government set aside $1.3 billion as compensation for 176 tribes and organizations.11 To the disappointment of many Native American peoples and tribes, a multitude of issues emerged, including much of the money being held in a federal trust, which led each recipient to be awarded roughly $1,000—if they received a direct payment at all.12

What Form Would Reparations Take?

The idea of issuing reparations for slavery in the United States has never been popular. Recent studies show that roughly 20-25 percent of the population supports reparations, with Black Americans being the only group offering majority approval.13 Many people have spoken on the subject over the centuries, both in fierce opposition and in strong support. However, even supporters do not widely agree on the precise form that reparations could or should take. In fact, one of the primary purposes of the H.R. 40 commission is to, at the very least, build some form of consensus around a proposal.

Regardless of support or opposition, one of the most challenging aspects of the reparations debate is the passage of time and incomplete documentation.14 The relative success of reparations for Japanese internment versus the poor outcome for Native Americans helps illustrate the challenge. Japanese internment was meticulously documented and had a specific start and end date. This made identifying the victims easier and their claims much harder to refute. Most of the direct victims of internment were also still alive at the time Congress passed reparations legislation, making the process that much easier.

By contrast, the taking of Native American lands, the forceful removal of Native American peoples, and the violence connected to it all took place over a protracted period with no specific timeframe and without thorough, reliable records to account for who was impacted. In the case of slavery, there is a specific end date, but observers disagree about whether that date is a sufficient determinant for reparations. Some scholars and proponents of reparations believe that the government should factor in the legalized discrimination that Black Americans faced for another century after the abolition of slavery.15

Some suggest that reparations should be monetary compensation to all Black Americans, both for the labor of their enslaved ancestors and for the ongoing discrimination they face. Others suggest that in order to receive compensation, Black Americans should be required to provide proof of ancestry (which is complicated by incomplete records). Some have suggested that monetary compensation is not sufficient on its own, and that reparations should come in the form of government programs, education initiatives, and funding for community organizations. Others do not believe reparations are necessary at all.16

At this point, the issue of reparations is far from resolved. But most people would benefit from learning more about the history of reparations, the history of the government’s treatment of minority groups, and the historical contribution of Black people to U.S. history since long before the country existed. Some of these links may help you:

« The 14th: Why A Reconstruction-Era Amendment is in the News
Back to all Posts
Addressing Economic Inequality: Elizabeth Warren’s Wealth Tax Proposal »